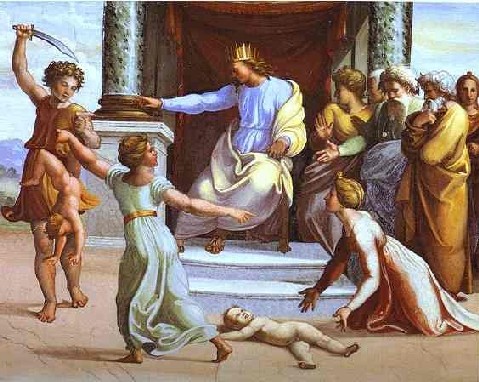 Yesterday on a media outlet, I read about the tragic murder/suicide of a 9-year old daughter at her mothers’s hand. Given the speed of today’s digital “news,” the crime is still under investigation, but sadly, we are hearing more and more of this. According to one study done in 2007, mothers make up only 31% of parents killing their children under five (with fathers, step-fathers, and step-mothers completing the statistic).

What is heart retching is that this is a statistic at all, wouldn’t you agree? Generally, we’ve all seen it: the gentleness of a mother with her new born, tenderly caring for this precious life. This is the norm. But somehow some have had their impulse to protect life damaged.

Beyond all the deep wounds of the whys and wherefores, I’d like to look in our main text today at the woman whose life impulse was not damaged.

Some would not expect a prostitute (aka “harlot” or “whore”) to have an undamaged impulse. We would expect her to be like the other prostitute who said, “Neither I nor you shall have him. Cut him in two” (v. 26b)! But her impulse to protect life was undamaged.

For years as a young boy, I would hurl at my mother, “You hate me! You hate me! You hate me!” And with a deep mournful, broken heart she would weep back, “Michael, how can I hate you? You are my own flesh and blood.” Sadly, it took me years to really understand the depth of the truth of this statement. But I have learned that my dear mother had an undamaged impulse to protect life, too—even mine….

Do you have any suggestions for those who may have a damaged impulse? What are your thoughts?

Main Text— 1 Kings 3:16–27 (NIV84)— 16 Now two prostitutes came to the king and stood before him. 17 One of them said, “My lord, this woman and I live in the same house. I had a baby while she was there with me. 18 The third day after my child was born, this woman also had a baby. We were alone; there was no one in the house but the two of us.  19 “During the night this woman’s son died because she lay on him. 20 So she got up in the middle of the night and took my son from my side while I your servant was asleep. She put him by her breast and put her dead son by my breast. 21 The next morning, I got up to nurse my son—and he was dead! But when I looked at him closely in the morning light, I saw that it wasn’t the son I had borne.”  22 The other woman said, “No! The living one is my son; the dead one is yours.”  But the first one insisted, “No! The dead one is yours; the living one is mine.“And so they argued before the king. 23 The king said, “This one says, ‘My son is alive and your son is dead,’ while that one says, ‘No! Your son is dead and mine is alive.’ ” 24 Then the king said, “Bring me a sword.” So they brought a sword for the king. 25 He then gave an order: “Cut the living child in two and give half to one and half to the other.” 26 The woman whose son was alive was filled with compassion for her son and said to the king, “Please, my lord, give her the living baby! Don’t kill him!”  But the other said, “Neither I nor you shall have him. Cut him in two!”  27 Then the king gave his ruling: “Give the living baby to the first woman. Do not kill him; she is his mother.”

But Zion said, “The LORD has forsaken me, the LORD has forgotten me.” “Can a mother forget the baby at her breast and have no compassion on the child she has borne. Though she may forget, I will not forget you! [says the LORD].—Isaiah 49:14–15 (NIV84)

As apostles of Christ we could have been a burden to you, but we were gentle among you, like a mother caring for her little children.—1 Thessalonians 2:6b–7 (NIV84)

Lord Jesus Christ, heal my wounded heart. Restore my passion and impulse to protect Life. Empower me to be like You—the Great Life Protector. In Your Name, Amen.