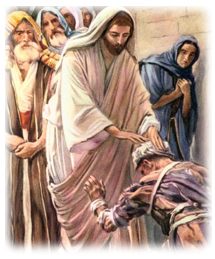 Is bigger always better? Or is greater always louder? Even noticed? Would you agree, if I were to suggest, that greater may be quiet, even subtle? The great oak starts out as a small sapling. It quietly grows in the forest. Yet it becomes a “mighty oak tree.” So, too, is it with the greater things of Jesus.

In our main text below, we see Nathanael amazed at Jesus’ simple ability to know Him from a distance, and our Master responds with a hint of playfulness—paraphrasing, “You ain’t seen nothing yet!” …

Our Master did this a lot. The “greater things” He promised Nathanael often came quietly and unheralded. Or at least He tried to. But why?

May I offer one explanation? The “greater things” were never intended to draw attention to themselves, and definitely not intended to draw attention to our Master as a “Miracle Worker.” Yes, He did miracles, healing all sorts of maladies, and though those He raised to life died—again, and those who were sick got some other illness, the “greater thing” He did was in the most unassuming and quiet way: To quote from “El Shaddai” by Michael Card, “Your most awesome work was done by the frailty of Your Son.” And this “greater thing” lasts. Those who are raised from the death of sin and darkness, never die again. Those whose souls are healed from the sickness of sin’s cancer never get sick again.

And this quiet work often goes unnoticed like a quiet gentle breeze….

What do you think about the quietness of the “greater things” Jesus does? Your thoughts.

Main Text— John 1:48–51 (NIV84)— 48 “How do you know me?” Nathanael asked. Jesus answered, “I saw you while you were still under the fig tree before Philip called you.” 49 Then Nathanael declared, “Rabbi, you are the Son of God; you are the King of Israel.” 50 Jesus said, “You believe because I told you I saw you under the fig tree. You shall see greater things than that.” 51 He then added, “I tell you the truth, you shall see heaven open, and the angels of God ascending and descending on the Son of Man.”

The wind blows wherever it pleases. You hear its sound, but you cannot tell where it comes from or where it is going. So it is with everyone born of the Spirit.—John 3:8 (NIV84)

Jesus reached out His hand and touched the man [with leprosy], “I am willing,” He said. “Be clean!” Immediately he was cured of his leprosy. Then Jesus said to him, “See that you don’t tell anyone. But go, show yourself to the priest and offer the gift Moses commanded, as a testimony to them.”—Matthew 8:3–4 (NIV84)

After the people saw the miraculous sign that Jesus did, they began to say, “Surely this is the Prophet who is to come into the world.” Jesus, knowing that they intended to come and make Him king by force, withdrew again to a mountain by Himself.— John 6:14–15 (NIV84)

Lord Jesus Christ, as You continue to reveal Your glory to me, may I cherish the quiet miracles of the soul.