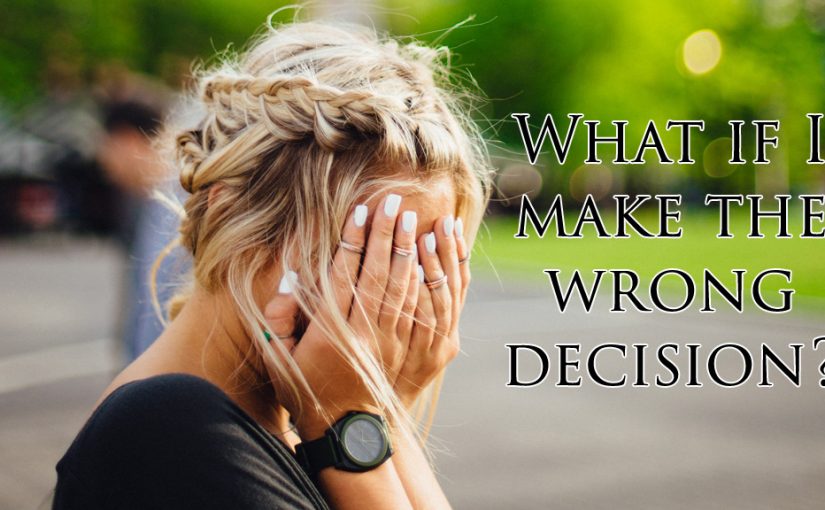 Lord, You have been deeply impressing me on one of my deepest fears: Being wrong. Being a recovering perfectionist, this should not surprise me, but it did what You reveal how deep in my soul this is. Though You have transformed me significantly, I still am hesitant to step too far out of my comfort zone for fear of being wrong….

Then, this week You showed me You can resurrect and transform even when I am wrong. As the Resurrection and the Life, You cannot only take the big things—the evil things—and transform them into something beautiful and good, You can take my little, insignificant wrong decisions, wrong choices, wrong whatever, and transform them into something beautiful. Yes, I understand that sometimes the path to this good and beautiful may be hard and difficult, even leaving a scar or two; You will still make the scars look beautiful. (And You should know, right?)

So I am learning to rest in this truth: Because Your resurrection power can transform any “wrong” decision, etc., I can trust You even if these have led me into the valley of the shadow of death. Your rod and staff will comfort me and I will walk in Your presence—forever!

I do believe this!

But our citizenship is in heaven. And we eagerly await a Savior from there, the Lord Jesus Christ, who, by the power that enables Him to bring everything under His control, will transform our lowly bodies so that they will be like His glorious body.—Philippians 3:20–21 (NIV84)

I pray also that the eyes of your heart may be enlightened in order that you may know the hope to which He has called you, the riches of His glorious inheritance in the saints, and His incomparably great power for us who believe. That power is like the working of His mighty strength, which He exerted in Christ when He raised Him from the dead and seated Him at His right hand in the heavenly realms.—Ephesians 1:18–20 (NIV84)

I am the Living One; I was dead, and behold I am alive for ever and ever! And I hold the keys of death and Hades.—Revelation 1:18 (NIV84)

Lord Jesus Christ, I praise You that You are the Resurrection and the Life in my life. I yield to Your transforming power as You overcome this fear in my life of being wrong. In Your Name, Amen.

Text: — Matthew 2:7-13 — 7 Then Herod called the Magi secretly and found out from them the exact time the star had appeared. 8 He sent them to Bethlehem and said, “Go and make a careful search for the child. As soon as you find him, report to me, so that I too may go and worship him.”  9 After they had heard the king, they went on their way, and the star they had seen in the east went ahead of them until it stopped over the place where the child was. 10 When they saw the star, they were overjoyed. 11 On coming to the house, they saw the child with his mother Mary, and they bowed down and worshiped him. Then they opened their treasures and presented him with gifts of gold and of incense and of myrrh. 12 And having been warned in a dream not to go back to Herod, they returned to their country by another route. 13 When they had gone, an angel of the Lord appeared to Joseph in a dream. “Get up,” he said, “take the child and his mother and escape to Egypt. Stay there until I tell you, for Herod is going to search for the child to kill Him.”  [NIV84]

The Big Idea: It is critical what we do with divine revelation.

As a pastor and a minister of the gospel for almost 40 years it has fascinated me at the responses I would get from the same information: Some positive and joy filled; some contemptuous and hateful. I know it is not a surprise; Jesus warns us about this, but it still fascinates me nonetheless.

Lifestyle worshiper: Have you found this to be so, too? Perhaps you have discovered as I have that it is critical what we do with divine revelation: Our destinies depend on our decision.

The Magi took the information the scribes offered, made a diligent search, and worshiped the Child. King Herod heard the same information and order the execution of all children in Bethlehem two and under. This latter decision is extreme, to be sure, but what about the decisions short of worshiping the Child-King? Are their destinies any different than Herod’s (who, by the way, died a painful death)? Your thoughts.

Scriptures to Renew Your Thoughts

Heavenly Father,  as I commit myself to follow the true Light , the Lord Jesus Christ, I pray I am singleminded. Keep my feet firmly walk ing in the Light as He is in the Light. May I hear His voice alone and obey His promptings. Empower me by Your Holy Spirit to live a life that is pleasing to You.  In Jesus’ Name, Amen.