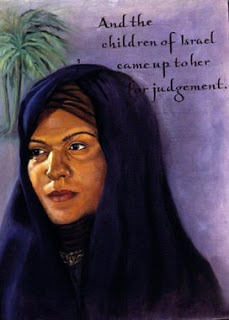 In a very male dominated society, she broke the glass ceiling. We are not told how she did it, but she did. And she was very wise about how she “wielded such authority.”

Deborah broke that glass ceiling and led (aka “judged”) Israel for 40 years. She herself was a very wise and noble woman. Some suggest that she was a “burning woman” in the sense of a Light for Truth and Justice; a torch for Righteousness. (This is seen in v. 4: instead of “wife of Lappidoth,” it could also be a “a woman of a torch-like spirit.”)

As a prophetess, the LORD had spoken through her to command Barak to take the leadership in a very decisive battle. He balked, but instead of commandeering the leadership—and still obeying the LORD, Deborah wisely accommodated Barak’s hesitancy (see 4:6-10).

And then she did something rather outstanding, at least in my mind: She blended well with Barak in a beautiful duet! (Through a very extensive song is found in Judges 5:1-31a.)

I am so impressed with this. She could have sung a solo. She could have even relegated Barak to a backup voice. But in her nobility and wisdom, she blended her voice with his. This is true godly leadership: Knowing when to stand up, stand out and blend with those we serve as leaders.

Do you think this is one reason why her story is included in the Bible? What do you think?

Main Text— Judges 4:4-5; 5:31b (ISV)— 4 Deborah, a woman, prophet, and wife of Lappidoth, was herself judging Israel during that time. 5 She regularly took her seat under the Palm Tree of Deborah between Ramah and Bethel in the mountainous region of Ephraim, where the Israelis would approach her for decisions. … 31 Then the land enjoyed quiet for 40 years.

But you, keep your head in all situations, endure hardship, do the work of an evangelist, discharge all the duties of your ministry.—(2 Timothy 4:5 (NIV)

To each person has been given the ability to manifest the Spirit for the common good….  Now you are the Messiah’s body and individual parts of it.—1 Corinthians 12:7, 27 (ISV)

Live in harmony with one another. Do not be haughty, but associate with the lowly. Never be wise in your own sight.—Romans 12:16 (ISV)

Lord Jesus Christ, empower me to faithfully fulfill the task You have prepared for me in advance to do with the gifts You have given me. In Your Name, Amen.