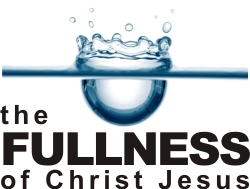 When I first came into a personal relationship with Jesus, I was more than impressed with His deity. In fact, I felt the Lord had called me to correct all the wrongs in various denominations. So I pounced on the New Testament, especially the Gospels and St. Paul’s letters. I loaded my theological Gatling Gun, removed the safety and was ready to unload its magazine at the first hint of any ignorance or denial.

One of the verses I constantly loaded into the magazine was Colossians 2:9: “For in Christ all the fullness of the Deity lives in bodily form” (NIV84). Fire fight after fire fight, I would empty this verse at those I encountered. And sadly, I was more interested in winning an argument than establishing a relationship….

Then one day, the Father was pleased to reveal to me more about Him through Jesus in the very next verse, 10: “and you have this fullness in Christ, who is the head over every power and authority” (NIV74). I literally hit a wall.

All those years I was trying to please the Father by defending His Son’s reputation and identity—and in some large way trying to earn His approval so I could get more of Him—when all along I already had His Fullness in me through Jesus….

Since then it has been a journey of decreasing while the Lord Jesus keeps increasing within me. I look at this as kind of releasing of compressed air. His fullness is compressed in me in various aspects of my life. When I yield to His presence, His compressed Presence fills the void left by my selfish self. In effect, His transforming power now controls a part of my life that had once been in bondage to sin and self.

Once again, the Lord’s timing is impeccable, for I was reading, The Practice of the Presence of God by Brother Lawrence earlier this morning and came upon this in the Fourth Letter:

He [Brother Lawrence] complains much of our blindness; and cries often that we are to be pitied who content ourselves with so little. GOD, saith he, has infinite treasure to bestow, and we take up with a little sensible devotion which passes in a moment. Blind as we are, we hinder GOD, and stop the current of His graces. But when He finds a soul penetrated with a lively faith, He pours into it His graces and favours plentifully; there they flow like a torrent, which, after being forcibly stopped against its ordinary course, when it has found a passage, spreads itself with impetuosity and abundance. (p. 42, The Spire Book)

I, too, was blind to this treasure, this gift of His grace: His Fullness— until the Father was pleased to reveal Him to me. How this all worked? What mechanism sprung? I do not know, but I do know that once I was blind, but now I see a little bit better….

From the fullness of his grace we have all received one blessing after another.—John 1:16 (NIV84)

But grow in the grace and knowledge of our Lord and Savior Jesus Christ. To Him be glory both now and forever! Amen.—2 Peter 3:18) (NIV84)

For this reason I kneel before the Father, from whom his whole family in heaven and on earth derives its name. I pray that out of his glorious riches he may strengthen you with power through his Spirit in your inner being, so that Christ may dwell in your hearts through faith. And I pray that you, being rooted and established in love, 18 may have power, together with all the saints, to grasp how wide and long and high and deep is the love of Christ, 19 and to know this love that surpasses knowledge—that you may be filled to the measure of all the fullness of God.—Ephesians 3:14–19 (NIV84)

Lord Jesus Christ, I praise You for Your Grace of Your Fullness. Strengthen my resolve as I continue on this journey of decreasing while You increase within me. In Your Name, Amen. 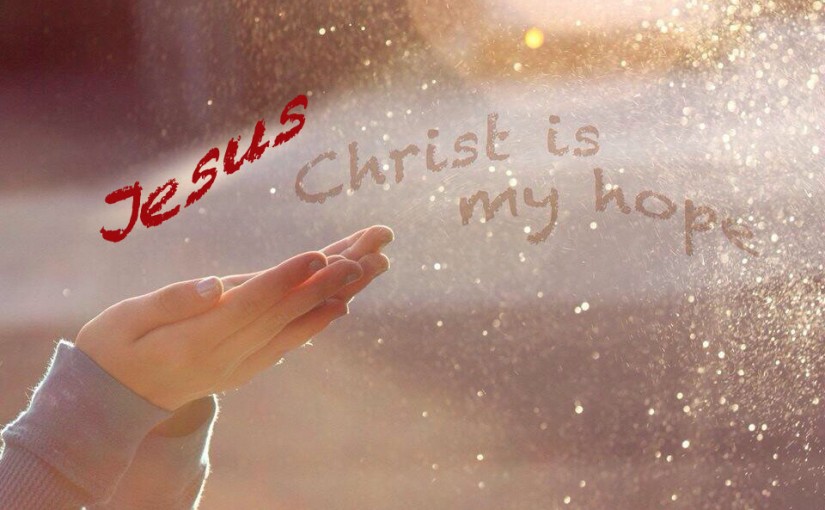 As I prepare this message on hope, I’ve had to constantly ask myself: Do I have hope for today? To some it may seem like a strange question, and indeed it is. Oh, I have hope for the future. I know Jesus is coming back to rescue me. I know I’m going to get a newly transformed body—free of age, aches and pains. I know I will be filled to the bursting of my new body’s seams with Joy and Peace and Adulation, for I will be seeing my risen Lord face to face….

But do I have hope for today? In today’s turmoil and strife and mild aches and severe pains and disappointments? Of late, I have caught myself saying, “Lord, this is bad,” with a very new thought that follows: “And I can’t wait to see how You work this out for good!” Whoa! Where did this thought come from!!!!???? Yes, I believe He works all things out for the good, but do I believe, in this moment, that He is working even this current “bad” pain, or trial or disappointment for the Good—for my good?

As I have continued this small exercise in a very mustard seed-like faith, I have been experiencing a rather strange buoyancy—a rather confident assurance mixed with a swirl of joy. And it is not fleeting as such feelings have been in the past….

Yesterday, at a community meeting, the person I was sitting next to had commented on something I was saying to a third person: “You need to live in the moment.” I know I have often missed the current “moment” because I was obsessed with past hurts or future worries, but she struck a chord in me. I know I have been on a long journey to learn to not live for the moment but in the moment. And when I live in the moment for Jesus, He connects all the moments, giving them a larger purpose beyond the moment of “today.”

And it is in this connection a Hope springs for today and beyond.

Have you had a similar journey with Hope, trusting the Lord to turn the current “bad” into good—in the moment? Or perhaps you are farther down the path than I? Your thoughts about hope for today—and beyond?

Main Text— John 3:16–18 (NIV84)— 16 For God so loved the world that He gave His only begotten Son, that whoever believes in Him should not perish but have everlasting life. 17 For God did not send His Son into the world to condemn the world, but that the world through Him might be saved. 18 He who believes in Him is not condemned; but he who does not believe is condemned already, because he has not believed in the name of the only begotten Son of God.

He has delivered us from such a deadly peril, and he will deliver us. On Him we have set our hope that He will continue to deliver us,—2 Corinthians 1:10 (NIV84)

We always thank God, the Father of our Lord Jesus Christ, when we pray for you, because we have heard of your faith in Christ Jesus and of the love you have for all the saints— the faith and love that spring from the hope that is stored up for you in heaven and that you have already heard about in the word of truth, the gospel.—Colossians 1:3–5 (NIV84)

Lord Jesus Christ, be Hope in me this day so that I may see how You are connecting my moments for a larger purpose in You.

Right out of college, after failing to get a teaching position, I turned to day-work and part part-time jobs to get by. One was a janitor at a blood draw facility. I was being trained to hospital specs. There were many tests along the way. One was the quarter behind the door. I had to change it out to two dimes and a nickel. Another was surprise inspections. I learned a lot of sayings, too: Clean what’s seen, and then clean what is unseen; look up, look down, look behind, look around.

But one of my favorite sayings is: It is easier to keep up than catch up. So always do a thorough job each night, that it goes more quickly. Skipping areas and having to catch up expends too much energy and wastes time….

Have you discovered in your spiritual journey with Jesus that it is easier to keep up than catch up? Sometimes in our journey we get tired and take a break, lingering a wee bit too long before some temptation. Or we continue to pick up baggage along the way, slowing our pace as the burdens grows heavier….

Keeping up with Jesus is much easier than catching up; at least this is what I have found to be the case. When I deal with my burdens (aka grudges, regrets, disappointments, resentments, any sins) earlier, they are much easier to discard. But as I nurse them, they seem to take on a life of their own, and feel more at home, than Jesus does. Now I know I am one to fix things way too soon, and confess sins that I may not be quite ready to repent of yet, but I’d rather be too early than, well, too late. I have found that confessing sooner is much more liberating than waiting until I “feel like it.” Oh, there are those times I come later to the place of deep soul repentance, but I have found as my walk draws closer to Jesus, merely being in His presence somehow makes those grudges, resentments, regrets, etc., all the more dirty, unholy and flat out sinful. I am more quickly repulsed by them. …

Anyway, having to run long distances to catch up seems more of a challenge than merely keeping up. What do you think? What are your thoughts?

Main Text— James 5:13–16 (NIV84)— 13 Is any one of you in trouble? He should pray. Is anyone happy? Let him sing songs of praise. 14 Is any one of you sick? He should call the elders of the church to pray over him and anoint him with oil in the name of the Lord. 15 And the prayer offered in faith will make the sick person well; the Lord will raise him up. If he has sinned, he will be forgiven. 16 Therefore confess your sins to each other and pray for each other so that you may be healed. The prayer of a righteous man is powerful and effective.

Since we live by the Spirit, let us keep in step with the Spirit. Let us not become conceited, provoking and envying each other.—Galatians 5:25–26 (NIV84)

Lord Jesus Christ, keep my heart sensitive to those things that displease You. May I deal quickly with those things that  so easily hinder me and the sins that so easily entangle me. Empower my feet to be swift to keep in Your steps. In Your Name, Amen.