Have you ever heard the phrase, “When the going gets tough, the tough get going?” I heard it a lot at half-time or a time out. But I never understood how tough the ‘tough’ had to be to “get going”. Have you? 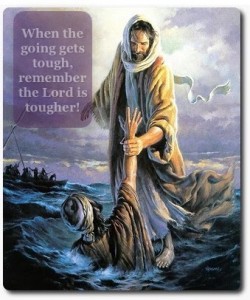 As a pastor I have never said this to anyone, but as I thought about this morning’s main text, I had to ask myself this very question: “How tough do the tough have to be to get going?” I have seen people concussioned by life: lost of child; a torturous losing battle with cancer; a pink slip suddenly arrives on the desk; and the list goes on. I have marveled how some rape victim become victors while others remain victims. Were the former “tough” enough and the latter “weaklings?”

In my own life’s concussions, I have not always been the victor, but rather wallowed in victim stew far too long. But one thing I have learned, the Lord is tougher still. As the Apostle Paul alludes to later in this harrowing episode late in his life, “Last night an angel of the God whose I am and whom I serve stood beside me and said, ‘Do not be afraid, Paul. You must stand trial before Caesar; and God has graciously given you the lives of all who sail with you.’ So keep up your courage, men, for I have faith in God that it will happen just as he told me. Nevertheless, we must run aground on some island” (Acts 27:23-26). It was his faith in the Goodness of God through the tough times that kept him going.

Now to some, this may seem naive and pietistic, but to those who have walked through the tough times of life’s severe concussions—first without the Lord, and then finally yielding to His presence, we understand the truth: It is not my toughness, but the Lord’s faithfulness that gets me through those tough times.

Have you found this to be so, too? Whatever storms, or trials, or difficulties or tough times we may find ourselves in the midst of, join me in remembering, “When the going gets tough, remember the Lord is tougher.” And, if you are like me, we also need to remember what the father whose young son was severely out of sorts said to Jesus after He said, “Everything is possible for him who believes”… “I do believe; help me overcome my unbelief” (Mark 9:23-24 NIV84)!

Main Text— Acts 27:9-12 (NIV84)— 9 Much time had been lost, and sailing had already become dangerous because by now it was after the Fast. So Paul warned them, 10 “Men, I can see that our voyage is going to be disastrous and bring great loss to ship and cargo, and to our own lives also.” 11 But the centurion, instead of listening to what Paul said, followed the advice of the pilot and of the owner of the ship. 12 Since the harbor was unsuitable to winter in, the majority decided that we should sail on, hoping to reach Phoenix and winter there. This was a harbor in Crete, facing both southwest and northwest.

At my first defense, no one came to my support, but everyone deserted me. May it not be held against them. But the Lord stood at my side and gave me strength, so that through me the message might be fully proclaimed and all the Gentiles might hear it. And I was delivered from the lion’s mouth. The Lord will rescue me from every evil attack and will bring me safely to His heavenly kingdom. To Him be glory for ever and ever. Amen.— 2 Timothy 4:16–18 (NIV84)

“I have told you these things, so that in me you may have peace. In this world you will have trouble. But take heart! I have overcome the world.”—John 16:33 (NIV84)

Finally, be strong in the Lord and in hHis mighty power. Put on the full armor of God so that you can take your stand against the devil’s schemes.— Ephesians 6:10–11 (NIV84)

Lord Jesus Christ, be my Shield of Faith. Quench the fiery darts that are being hurled at me. Be my Shoes of  Peace that I may be calm when enduring tough times. In Your Name, Amen!